PAPA WANNA is a traditional mama juana Dominican liqueur but with a twist.

PAPA WANNA has enhanced aphrodisiac powers. It was developed from an original mama juana  recipe but is fortified with known natural aphrodisiacs.

The history of the Papa Wanna

Based on the Original Dominican Drink Mamajuana

First of all – what is Mamajuana?

Mama Juana is a mixture of bark and herbs left to soak in rum, red wine and honey.
The solid ingredients (local leaves, barks, sticks and roots) vary from region to region but usually include some of the following:

In addition to the above standard recipe, it is common for individuals to add other ingredients such as  cinnamon , raisins ,  strawberry ,  molasses , and lemon or lime juice.

During the dictatorship of  Rafael Trujillo , the sale of mamajuana was prohibited. The law stated that a medical license was required to sell mamajuana.

Mama Juana was popularized as a local herbal medicine and aphrodisiac in the 1950s by Jesus Rodriguez, a native of San Juan De La Maguana. Rodriguez would commute with others in trucks to Barahona, Azua, Pedernales, and many other provinces in the Dominican Republic to collect the items needed to create the medicinal drink.

Rodriguez eventually would be known under the moniker “Mamajuana” by many of the locals, Tatico Henriquez and other merengue típico artists such as Trio Reynoso and El Cieguito De Nagua, who were close friends of Rodriguez.

Another notable mamajuana drinker was Porfirio Rubirosa, the famous Dominican playboy, polo player, race-car driver and secret agent. Rubirosa was famous for his sexual prowess and was known to be an avid mamajuana drinker, as mentioned in his biography, The Last Playboy.

The local residents of Dominican Republic refer to Mamajuana as the “Baby Maker” and “El Para Palo”, which means Lift the Stick. The Dominicans say, “Whatever tortures you – Mamajuana takes care of it”

Papa Wanna adds a new page to this rich history with a carefully blended drink which contains all of the traditional ingredients – but a few special all-natural secret ingredients which are known aphrodisiacs.

Try it for yourself and see!  Papa Wanna is second to none!

Did you know?  Mama Juana is considered one of the first distilled spirits in the Americas, even before rum. This is plausible considering that Christopher Columbus  mixed European alcohol with the Taino Indian ‘s herbal tea and this created mamajuana. 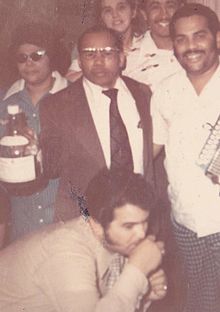